the meeting point for TrackDollar user

I used ArcGIS to find those boundaries. I didn't need an account, I just needed to zoom in to the region. I couldn't quite get the VA and NC counties to show at the same time, so I just clicked more/less detail until I had a good idea about where they lined up.

dctim wrote:I used ArcGIS to find those boundaries. I didn't need an account, I just needed to zoom in to the region. I couldn't quite get the VA and NC counties to show at the same time, so I just clicked more/less detail until I had a good idea about where they lined up.

I managed to use it...and get the NC/VA border area to show....and I was right, Mecklenburg does not quite touch Person....but the addition of Halifax covers that.  I could also see there that Pittsylvania touches Rockingham but not Stokes in NC...but Henry in VA would touch Stokes in NC

I have Stokes and Guilford in NC...but I do not count Stokes as part of my glob as Guilford and Stokes share only a corner.  I don't consider a diagonal corner-touch good enough to include in a glob. Now, on my own map drawing of Virginia, it could be argued that Goochland and Chesterfield don't quite touch enough for inclsuin into a glob, however the ArcGis map shows plenty of area in which they overlap enough to include.  I knew this already, which was why I had included them both in my old Home Glob.

I now have LOADS of ways in which I am two Counties away from hooking my old Glob to my new one.

Any of those two-County combos would hook my new Home Glob to my old Home Glob, and allow me a glob extending from Maine to North Carolina.

Brunswick, NC would allow me to add 11 Counties in SC...and two in Georgia.

But I gotta get them first, LOL

It's a nice tool.

A hit in Rockingham, NC hooks up Stokes, NC and Patrick, VA into my glob, and now I protrude into VA in two places.

For those interested, I have made myself a Globs Map. The Counties in color are my current home glob. The wite areas are either part of my old home glob...or are close to getting hooked to another glob, or are of significant size on their own. Only the colored-in ones are part of my home glob.

By getting Ulster County in New York State, I just added 21 counties to my glob!!!

Granville, NC puts me up to 31 places.

Added Brunswick, VA...which also adds Nottoway, VA.  Two added to my glob, and I am now one County away from hooking my new glob to my old glob. I am now at 33 places.

Amelia or Dinwiddie in Virginia would do it.

Gates, NC joins Pasquotank and Perquimans to my Main Glob, bringing my total to 164.

A hit in Forsyth, NC allows me to add to my glob big time.

Add a total of 8 counties to my glob.

The following are added

I should now be at 42 places.
Wait till I hook up my old glob with my new glob, I'm taking off like a rocket then!!!

My glob grew! I think there are 16 counties in it now 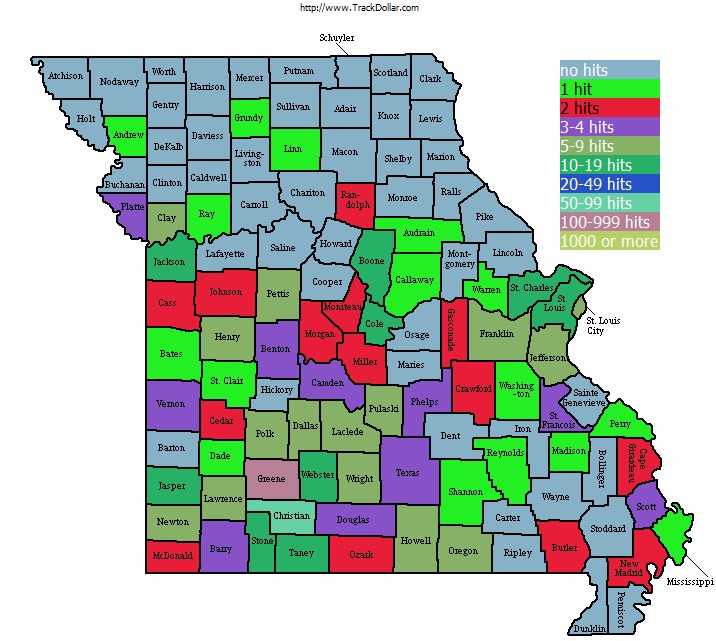 Looking at the national map I think I count 22 counties total. Woohoo!

Jack002 wrote:Looking at the national map I think I count 22 counties total. Woohoo!

As for me, take me up to 43, just hit Hoke County, North Carolina.

Check Jack's profile, his glob crosses into Arkansas and IL and recently expanded to 23 (although he may not have said so here).

Didn't look at his profile...just at the map he posted here.

Incidentally, a hit in any of the following would get me a bunch of SC Counties into my glob, and get me into GA.

Columbus County is, by the way...whee the team bus for our hometown baseball team, The Carolina Mudcats crashed about a week ago. Fortunately, everyone was okay, minor injuries only. But the bus flipped on its side and skidded a ways down the road.

They were on their way to Myrtle Beach when it happened. Myrtle Beach is the only team in our Division who is ahead of the Mudcats.

539 -- Glob now covers half of the contiguous states. Progress beyond these 24 will be frustratingly slow. I foresee only two — maybe three — more joining the Glob this year. Update: 25 now with Vermont joining the fray. 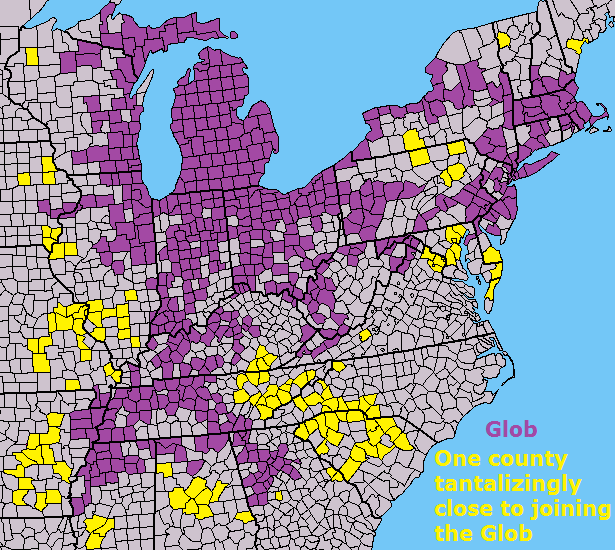 There are 13 counties which can connect the 49 county yellow KY/TN/NC/SC/GA glob to my TrackDollar home glob.

A hit in BRUNSWICK, NC...adds the following to my glob:

Kalisiin wrote:A hit in BRUNSWICK, NC...adds the following to my glob:
This adds 14 to my glob...which as a result, is now 59...and spreads over four states.